Bloodline: The Animated Series - Has a storyline that will break barriers and change the world.

Matawan, NJ -- (SBWIRE) -- 10/10/2014 -- The attraction of anyone to any animated series is the story. And the story behind Bloodline is epic to say the least. On a planet named Hopeskin the king is dying due to a disease that legend says can only be caused by a rare element that no longer exists. The royal bloodline controls the planet itself impacting every aspect of life in the world. Everything from the atmosphere to the mood of the average citizen of Hopeskin. The king's son was killed earlier that year leading to a twist of fate not seen in 3000 years; there will be a new bloodline controlling the planet represented by Master Ruko, the king's step brother.

Master Ruko is not only the king’s step brother but also his "Royal Regent". Master Ruko pretends to have nothing but good intentions for the planet once he is king but secretly is leader of "The Dark Alliance ". The king’s five closet subjects "The Royal Circle" could sense that Master Ruko had evil intention. Out of hopeless desperation they perform a forbidden ritual to seek out anyone in the universe with the same bloodline as the king to prevent Master Ruko from assuming the throne. This ritual cause the symbol of the planet "The Eagle of Hopeskin" to awaken and travel the universe in search of anyone with the current Royal Bloodline. The eagle comes across a planet named Earth. His search has ended for he has found what he was seeking.

Once in Earth’s e atmosphere he circles the planet as he locates his quarry ending up outside of a house in a small city; the home of Zeinshaw Rollin a 16 year old high school student. The eagle transmits the signal and data back to the royal circle. Startled enough to discover someone of royal blood lives so far away, they were shocked when they realized he had the same exact inner energy pattern as the first king of the "Royal Bloodline". The only possible conclusion? The reincarnation of the strongest person to ever rule Hopeskin lives on Earth.

Crowdfunding is sought to bring this epic animated series to the public to allow this tale to be enjoyed by animation fans all over the world. 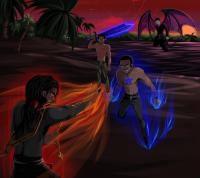 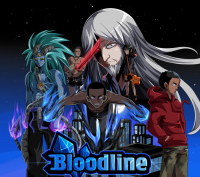