Phoenix, AZ -- (SBWIRE) -- 11/17/2017 -- Tony DUrso, host of The Spotlight and Revenue Chat podcast shows, has teamed up with 15-time World Martial Arts Champion and Current World Self-Defense Champion John Gill to host several free self-defense classes this weekend, Nov. 18-19 in Fullerton, Malibu and Beverly Hills. The association was borne out of recognition of International Day for the Elimination of Violence against Women, celebrated one week later on Saturday, Nov. 25.

The workshops are designed for total beginners and practices non-contact drills. The teachings are easy to learn and safe to practice. The official title of the program is called SAFE seminars, SAFE being an acronym for Self-Defense, Anti-Bullying, Fun and Fitness and Empowerment.

"With what we're seeing on the news every day, there isn't a better time to draw attention to this cause," stated DUrso. "I had the idea after taping John Gill on my show, mentioned it to him, and he was immediately on board 100 percent. The issue of domestic violence against women is a cause that we both deeply care about and hopefully the women of these communities will take advantage of this free offer of self-defense training."

John Gill is the Current World Self-Defense Champion (in both Open and International Rules) and winner of 26 martial arts titles, including 15 World Championships in Black Belt Self-Defense at the World Martial Arts Championships held each June in Las Vegas, run by the International Martial Arts Council (IMAC). He is a 7th Dan Black Belt Master Instructor in both Hapkido and Taekwondo. Gill was just inducted into the USA Martial Arts Hall of Fame as 2016-17 Hapkido Master of the Year and 2017 Black belt Competitor of the Year. He taught at Anaheim and Orange County high schools and holds corporate motivational empowerment workshops. John's mottos are "fear not, fire up" and "actions speak louder than words."

"As an ambassador of the White Ribbon Foundation for the prevention of violence against women, I'm honored to lend my expertise in self-defense for such a worthy cause as International Day for the Elimination of Violence against Women," stated Gill. "It's my hope that the women of these communities come out and take advantage of this offer to learn how best to protect themselves when confronted with danger."

The free classes are also open to men, children, seniors and entire families. In fact, Gill has also recently formed the world's first senior self-defense system designed for senior citizens over 55, called Taikido, which is a mixture of Tai Chi and Hapkido with no contact self-defense and Tai Chi moves for personal safety, exercise and better health for seniors. Gill has been taking this program into retirement villages and over-55 communities. Everyone will have the chance to learn something new in addition to promoting ideals and respect for women.

Pre-registration for the free classes is suggested, but not required, in order to get an accurate head count of the expected turnout.

For a complete rundown of event-specific information, please visit http://www.tonydurso.com/defense.

Tony DUrso is Host of The Spotlight on VoiceAmerica's Influencer Channel. His live shows air every Friday and 1 PM PST and all shows are available on demand at https://www.voiceamerica.com/show/2667/the-spotlight-with-tony-durso. 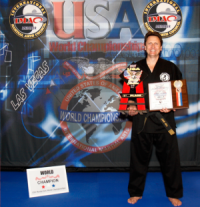