Telling the frankly-honest truth about his two years in the United States Marine Corps, Stephen G. MacDonald goes beyond the ‘blood and guts’, enlightening readers to a world and life they’ll likely never experience for real.

Eastham, MA -- (SBWIRE) -- 01/30/2013 -- While Vietnam played out on television to billions around the world, comparatively few people went through the experience of being a low-level enlistee at a time of war. Wanting to share his experience with the world, Stephen G. MacDonald announces the release of his compelling memoir.

‘War Stories: An Enlisted Marine In Vietnam’ is a frankly-honest and explicit account of the author’s time in service.

War Stories: An Enlisted Marine In Vietnam is a memoir of my two years in the United States Marine Corps. It tells what it was like to enlist in the Marine Corps and serve as a field radio operator with an infantry battalion near the southern edge of the DMZ in Vietnam in 1967, a time and place of intense fighting.

Wanting to show people life beyond the bloody images strewn across the media, the author hopes his story garners much-needed appreciation for the Marine Corps.

“Most of us believe that the world is less than ideal, and that there are people and countries from whom we need to defend ourselves. The Marine Corps is an important part of that defense, but war does have its costs. When we ask so much of our Marines, we owe it to them to try to understand their sacrifice,” says MacDonald.

Continuing, “This book can help. It is written for the general public, so it's not just a blood and guts story. It's a great read for people who want to know what it feels like to be a low level Marine in wartime.”

Since its release, the book has enjoyed a consistent string of rave reviews.

“MacDonald's delivery of his well-protected memories will serve as a meaningful elixir to those who served in that foolish war and hopefully will provide advice to young men who see the military as a means of making a living during these hard times: the potential threats of being a soldier have rarely been so well defined as in this fine book,” says Grady Harp, who reviewed the book on Amazon.

Another reader was equally as impressed, saying, “This book is an honest presentation of what is was like to be in Vietnam without any gratuitous gore. The horror of the experience is clear as is the bravery of all that were there. The author's humility is refreshing.”

With a 4.5-star rating, the book is resonating with thousands of readers around the world.

“It is being enjoyed by both those who have served and those who haven’t. That was my goal - to provide a book that anyone would find compelling.” MacDonald adds.

With its popularity expected to rise, interested readers are urged to purchase their copy of the book as soon as possible.

‘War Stories: An Enlisted Marine In Vietnam’, published by CreateSpace, is available from Amazon: http://amzn.to/14oE1F7

About Stephen G. MacDonald
After his two year enlistment, Mr. MacDonald returned to college using the G.I. Bill. After graduation he worked as a mechanic, then as an electronics technician, and finally as a computer programmer, until retiring in 2001. Off and on during those years, as his ongoing battle with PTSD would allow, he wrote and refined this memoir. 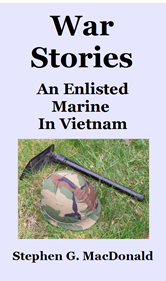