Written by Dr. Ed. Reitman, the revolutionary new book exposes how men and women’s traditional approach to relationships contribute to rising divorce rates and ongoing struggles with one another. This is due to their inability to escape obsolete gender roles, which previously depicted women as wimps and men as warriors. As the North American divorce rate rises well above 50%, ‘Warrior, Wimp or Winner’ is set to become a rapid bestseller.

Houston, TX -- (SBWIRE) -- 09/27/2013 -- While the world struggles with drug, immigration and economic epidemics, Dr. Ed Reitman is urging all Americans to focus on a far more threatening reality – divorce. While over half of marriages now end inside a courtroom, Dr. Reitman is attempting to place critical status on a problem nobody appears to be trying to rectify.

His ground-breaking new book, ‘Warrior, Wimp, or Winner: What Role Do You Play in the Battle of the Sexes?’, is a personal attempt to tackle relationship problems that have plagued humans for generations. Above all, it all comes down to one thing – the age-old battle of the sexes.

Whether single and ready to start a new relationship, looking to improve a tired marriage, or hoping to avoid repeating mistakes you made in the past, Warrior, Wimp or Winner will help you to establish the loving relationship you always dreamed of. Through informative discussions and practical guidelines, you will discover how the ways men and women historically approached relationships contributed to the difficulties they now encounter in their struggle to escape obsolete gender roles. You will learn how to break free of old role models, end reliance on ineffective, habituated behaviors, curtail playing the victim, and, most importantly, gain control over the biggest obstacle in your life: yourself.

As the author explains, divorce just doesn’t get the attention it deserves.

“If the headlines in our newspapers read that 54 to 56 percent of the oak trees in the country were dying because of a particular form of blight, every tree hugger would be up in arms, shouting, “Do something about it!” Yet, professionals and laymen alike watch the institution of marriage deteriorate at the same rate and ignore it. All the while, the consequences of this disease continue to affect our whole society,” says Dr. Reitman.

Continuing, “The first step in this direction is to search out the major factors contributing to this epidemic, foremost among them a significant change in the age-old battle between the sexes. I expose men for who they really are: frauds who are strong on form but weak in substance. I further suggest that beneath the surface of their masculine image lies a strong sense of false pride, excessive vanity, and a desperate need for nurturing. All of which has been obscured by an air of pompous superiority, accompanied by the erroneous but widely accepted notion that women are basically weak and dependent on men to protect them.”

While many theorists ponder the effect of and possible solutions to rising divorce rates, Dr. Reitman is confident that his professional experience will allow him to make a real difference.

“I maintain a very busy full-time practice which brings me into contact with hundreds of adolescent and adult clients each year. While I deal with an abundance of individual problems, marriage struggles and divorce are by far the most prevalent. I see people before, during and after divorce – giving me a very well-rounded perspective on the situation. In short, it’s dire,” he adds.

With the book’s popularity expected to increase, interested readers are urged to purchase a copy and save their relationships as soon as possible.

‘Warrior, Wimp, or Winner: What Role Do You Play in the Battle of the Sexes?’ is available now: http://amzn.to/1dvt4oY.

About Dr. Ed
Dr. Ed’s professional achievements have been recognized in Houston, the state of Texas, and the United States. He is particularly proud of having been voted “The Best Shrink in Houston, Texas” in a survey of the readers of the former Houston Post newspaper.

These honors and acknowledgments have, however, not gone to his head. He is forever mindful of his less than stellar early academic achievements, due being “a classic attention deficit disorder child”.

Because of that, he experienced difficulties in elementary and middle school and withdrew from high school after the first month of his freshman year. Years later, after spending time in Alaska and serving in the U.S. Air Force, he passed a G.E.D. high school equivalency test and received his high school diploma from the Territory of Alaska. He went on to earn a Ph.D. in psychology. Dr. Ed states that, more often than anyone might imagine, he is amazed at his own achievements. He feels that there are many other individuals in the world with equal intellectual ability, creativity and talent than himself who, unfortunately, have yet to discover their own sense of worthiness.

Dr. Reitman books also include “Games Lovers Play”, “Hungry For Love”, and “You’re Okay, But You Don’t Know It”. 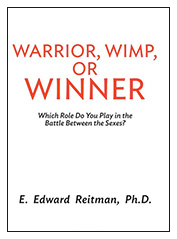