Las Vegas, NV -- (SBWIRE) -- 01/13/2014 -- Where rock, punk and pop collide, there are other bands that might fit the bill, but none are as infectious and in-your-face as Wasted Measures. Hailing from Orangeville, Ontario, Wasted Measures have spent years honing and perfecting their sound, and they're now ready to put that experience to work for their debut album, A.M. Days.

Wasted Measures is a quartet of talented musicians who all donate their own unique background and perspective to the group. This is includes Luke Ryan on lead vocals and guitar, Ian Stoodley on bass and backing vocals, Josh Oullette on drums and backing vocals and Ben Riddell on guitar and backing vocals. The lineup has seen some changes since the band's inception, but thecurrent four are comfortable feeding off each other's creativity to create music they call their own.

Their most excited upcoming venture is A.M. Days (2013), the full-length debut album they've been working on and recording for months. This album is a long-time coming for a group of guys who has mostly been playing together since high school and who stuck it out after all this time to see this band's successes through. They plan to release it by the end of November.

On this album, fans may hear elements of Nirvana, Sublime and Rise Against--to whom they've often been compared--as well as inspirations from some of their influences, such as Bob Marley, The Beatles, Creedence Clearwater Revival, NOFX, Rancid, Red Hot Chili Peppers and Rage Against the Machine. The result is a blend of rock, punk and pop with hints of grunge and reggae, all mixed together in a kinetic and energetic sound that's a perfect fit for live performances and blaring on the car radio.

In addition to their music, the group also enjoys powerful influences for their songwriting. A.M. Days is about a girl that lead singer Luke Ryan loved in high school, and it also delves into other adolescent issues, such as breakups, hopeless romantics, sex and so on. In general though, their inspirations can run the gamut, and they'll write about whatever they feel most strongly about. They are committed to keeping their writing process open to fresh ideas whenever they sit down to play.One song they've released on YouTube, a sneak peak of their upcoming album, gives a good idea of their music and methods.

In “Forever and a Day,” Ryan sings about the longing and loss of a past love. A steady, classic punk rhythm in the percussion collides with simple one-note strums of the guitar, which are percussive in their own right, and the two create a sense of urgency and constant forward motion that matches the intensity of Ryan's lyrics. “Some Day” offers a similar sentiment in the lyrics but changes up the melodies and percussion to demonstrate the group's musical versatility.

Wasted Measures as performers started out on the right foot--their first gig was the New Music Festival in Barrie, Ontario. There they shared the stage with illScarlett, USS and Treble Charger. They performed this summer at the North by Northeast (NXNE) festival in Toronto alongside such bigwigs as Millencolin and Social Distortion. They also recently participated in a Battle of the Bands in the Shelburne Arena where they took home second place.

Check out a song from their set at Hogey's where they performed “Sinead, Sinead” live.

For a live experience of Wasted Measures' songs and on-stage energy, upcoming performances include Guelph on October 11th and Fergus on November 29th.

It's time for their group to branch outside of their current small town element and reach new fans throughout Canada and beyond. Armed with their new album, this expansion will be made with ease. 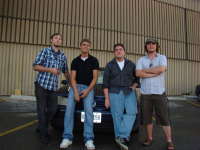