The Controversial, New Book That the Weight Loss Industry Doesn't Want Millions of Women to Read

Gourmet Chef Slams The Weight Loss Industry For Its Deceptive Practices And Offers Millions Of Women, Who Have Struggled In The Past, A Better Way To Lose Weight

Philadelphia, PA -- (SBWIRE) -- 11/29/2012 -- It’s estimated that on any given day, some 80 million women are on some form of diet. If that is the case, then why are so many women still overweight? Chef Jai Scovers (pronounced Jay Scoh-Vers), knows what it takes to lose weight and finally keep it off. She successfully lost 18 pounds and managed to keep that weight off for the last two years, despite being a trained gourmet chef and working with some of the most tempting foods ever.

Like millions of women, Scovers knows from personal experience that any diet or weight loss program is often very easy to start, but the minute that she began to feel hungry or started to crave any real food, even, some of her favorite desserts, every diet that she tried become harder to stick to. That, she suggests, is the point where most diets can and will fail for millions of women.

Scovers reveals that she also became frustrated when she found herself being forced to skip or skimp on meals just to stay on these diets. It was then that Scovers developed the idea for The Hungry Chick Dieting Solution. In The Hungry Chick Dieting Solution, Scovers reveals how to easily shed up to 50 of those embarrassing pounds and the most proven, fast, safe and effective way to manage this weight loss. She does this by showing women how to make healthier choices from the foods that they already eat not some expensive prepackaged meal, gimmick or trick.

“There is a lot of hype and mystery surrounding the diet and weight loss industry in order to keep people buying into their products,” Scovers reveals. “I know; I have tried almost every last one of these diets with little to no results. For every diet that claims that they have helped millions of women to lose weight, ask yourself again, ‘Why are so many of these women still overweight?’”

In an even more controversial move to help the millions of these women, The Hungry Chick Dieting Solution has become the first book to take aim at the fraudulent business practices of the weight loss industry and the lies that millions of women have allowed themselves to believe about dieting and weight loss.

Including:
- Why every diet that that most women have ever tried, until now, has failed? Here’s a hint: If the forces behind many of these diets know that the average dieter will try up to four plans a year, why should they design one that will actually work?

- This book also reveals how to avoid making one of the biggest dieting mistakes ever. This has to do with the amount of water than a woman drinks every day. It is not the eight to ten glasses that we think we should drink. This is one of the best kept secrets in weight loss industry.

- Scovers also, for the first time ever in any book, will show women how to find out what their ideal or goal weight should be and how to reach that goal. It’s not the 10% of a woman’s body weight that some diets and weight loss programs suggest that a woman should lose to be healthier.

According to Scovers, “The Hungry Chick Dieting Solution is not just another diet book; this is a solution to years of yo-yo dieting. With The Hungry Chick Dieting Solution, I set out to design a real weight loss plan for real women, giving many of these women the first chance that they will ever have to see real results. In the end, I want to make this the last diet book or weight loss program that any women will ever have to buy.”

The Hungry Chick Dieting Solution is currently on sale now at Amazon.com, at Barnes and Nobles, Books-A-Million, and wherever quality books are sold. Proceeds from the sale of every copy of this book will go to support several charitable efforts, including, but not limited to, supporting the local food banks which help to feed thousands of hungry families every day.

About Jai Scovers
Chef Jai Scovers (pronounced Jay Scoh-Vers) is a trained gourmet chef and a graduate of the world famous Restaurant School at Walnut Hill College in Philadelphia, Pennsylvania. Chef Jai has worked to develop her skills in such well-known and recognized dining establishments, as the famed Stephen Starr restaurants to Harrah’s Showboat Hotel and Casino in Atlantic City. Chef Jai Scovers is an advocate in the fight against childhood hunger and raising awareness about healthy eating. She currently lives and works in Philadelphia, Pennsylvania. For more information about the author or her book, “The Hungry Chick Dieting Solution,” log on to www.HungryChickDiet.com. 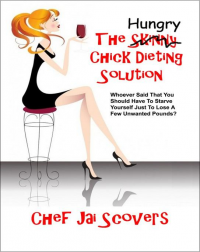