San Fransisco, CA -- (SBWIRE) -- 05/30/2012 -- Bonga Perkins is a household name in the surfing world and he has won the longboard world title in both 1996 and 2008. Perkins has also finished in the top 5 every season with four 2nd place finishes along with his two world titles. His first title came in 1996 when he was only 24 years old. In terms of surfing history, that’s a pretty big deal.

Born in Oahu, Hawaii, Gregory “Bonga” Perkins was raised in Honolulu, living life like a new age Waikiki Beach Boy among throngs of party obsessed tourists stacked in concrete hotels shadowing the shoreline and an endless supply of epic reef breaks perfectly suited to longboarding. In fact, Waikiki (and the South Shore for the most part) is ruled by longboards, and it was in this atmosphere “Bonga” first rode a surfboard at age 5. He spent his early years roaming Oahu’s South Shore beaches. Few beach cultures are more rooted in surf history than Waikiki, and this gave Perkins a unique perspective. His goals seemed to focus more on the holistic surfing experience rather than a desire to master one provincial mode of wave riding. Therefore, he gained experience in all manners of surfing. Bonga went on to master everything from bodyboards, canoes, longboards, shortboards, to SUP’s. He is undoubtedly one of the premier “waterman” on the planet.

But before he made his name in surfing, Perkins actually spent many years in anonymity just riding waves, presumably as a standout at his local haunts. Perkins first broke the surface in 1989 with a 2nd place showing at the United States Championships, and, according to Matt Warshaw, “lived in Japan for 2 years in the early 90’s as an English language tutor.” Somewhere during this time, Perkins secured his competitiveness and amassed an impressive list of finishes on the world stage.

Perkins has recently partnered with Visalus Team Vi-Life to become an Independent promoter of the ViSalus Body By Vi - 90 Day Challenge.

ViSalus is a leading health and wellness company that proudly makes a positive impact on Life, Health, and Prosperity through the company’s Body by Vi 90-Day Challenge which combines leading health products that assist people achieve their weight loss and fitness goals, save money along the way, and win over $25 Million in prizes every year.

ViSalus is currently experiencing record growth. According to a Company press release - sales have increased seven fold from $34 million in 2010 to a staggering $231 million in 2011. ViSalus was also featured in an exclusive insert in the Wall Street Journal called “Why Now Is Prime Time for Direct Selling”. Visalus also recently introduced their own fitness magazine called, The Challenge.

For more information on how to partner with Bonga Perkins and Visalus Team Vi-Life, please visit: http://www.BongaPerkinsChallenge.com or http://www.TeamVi-Life.com 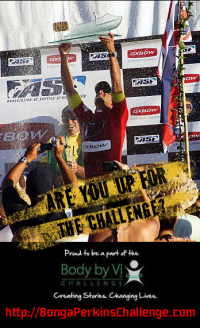