Hot off of two Off-Broadway successes this year, the group returns to The Art House theatre where their fast rise began. New show to run June 30 - Sept. 1.

Provincetown, MA -- (SBWIRE) -- 07/08/2013 -- Called the “hottest thing with a bow since Jennifer Lawrence in The Hunger Games” by the New York Daily News, Well-Strung: the Singing String Quartet will return to Provincetown’s Art House theater this season. Since the group’s 3-month run at the venue last summer, they’ve been on a roll - with two recent hit New York productions Off-Broadway and their first album released this spring. Well-Strung will debut an all-new show for the summer, running from June 30 – Sept. 1. It is directed again by Donna Drake, and will feature new arrangements of songs by Pink, Kelly Clarkson, Taylor Swift and Third Eye Blind among others as well as new material written by Jeffery Roberson (aka Varla Jean Merman). For tickets, please visit www.ptownarthouse.com or call 800-838-3006.

Two days before beginning their own extended run, the group will also make a guest appearance in Broadway star Joanna Gleason’s show which will launch the theater’s acclaimed Broadway @ The Art House series this season on June 28 & 29. Joanna Gleason, Tony Winner for Into The Woods will combine in each performance the East Coast premiere of a one act play BLOOM, written for her by Michael Patrick King (creator of Sex and The City & Two Broke Girls) with a second act of songs featuring Well-Strung as special guests.

A hit last summer at this theater for their unique ‘mash-up of string quartet and boy band,’ the group features classical musicians who sing, putting their own spin on the music of Mozart, Vivaldi, Ke$ha, Pink, Adele, Lady Gaga, Britney Spears and more. They are Edmund Bagnell (first violin), Christopher Marchant (second violin), Daniel Shevlin (cello) and Trevor Wadleigh (viola). Music arrangements are by David Levinson with additional arrangements by Daniel Shevlin. The show was directed by Donna Drake, conceived by Christopher Marchant & Mark Cortale and written by Ms. Drake & Mr. Cortale, with additional material contributed by Jeffery Roberson. Immediately after their upcoming P-Town run, the foursome will continue their career hot streak with a debut on London’s West End in September at the Leicester Square Theater.

The group first began performing together in a workshop production of the show directed by Ms. Drake at Ars Nova in NYC on Feb. 28th, 2012. Musical arrangements were by Mr. Levinson with additional arrangements by Mr. Shevlin. That same show sold out at Joe’s Pub in May of 2012 before having an extended run last summer at The Art House in Provincetown, MA and playing Off-Broadway at the Marjorie S. Deane Little Theater last fall. The group returned to Off-Broadway for the first three weeks of March, 2013, and sold-out the Highline Ballroom for one night in early May. The foursome’s debut album was released on Twist Records on February 28, and was produced by Matt Farber (Founder of LOGO Network) and Mark Cortale.

Daniel Shevlin (Cellist/Arrangements) appeared off-Broadway in "The Sandbox" written and directed by Edward Albee, toured the U.S. and Asia in productions of "Rent" and "Cabaret" (Studio 54 version), and has worked regionally as both an actor and cellist in many theaters including the Arvada Center (CO), The Maltz-Jupiter Theatre (FL), Riverside Theatre (FL), Mason Street Warehouse (MI).

Mark Cortale is the Producing Artistic Director of The Art House. In his inaugural season in 2011, he founded the Broadway @ The Art House series with Seth Rudetsky, which this summer of 2013 will present Broadway superstars Patti LuPone, Chita Rivera, Sutton Foster, Audra McDonald, Megan Hilty (of TV’s “Smash”), Megan Mullally (of TV’s “Will & Grace”), Christine Ebersole, Joanna Gleason, Sam Harris and Marilyn Maye in addition to other national-level music and comedy programming. He is currently producing Seth Rudetsky’s new reality series and other Broadway-themed entertainment that can be seen at www.SethTV.com. He also co-wrote and produced Well-Strung’s runs this past winter and fall at New York’s Marjorie S. Deane Theater. Mark produced the feature film "Varla Jean and the Mushroomheads," which played the 2012 festival circuit with a screening at Frameline in San Francisco. Mark also premiered the Broadway @ series this season in New Orleans, in Australia with Megan Mullally, on London’s West End this month with Patti LuPone at Leister Square Theater, and will debut as well in Santa Monica, CA in fall of 2013. 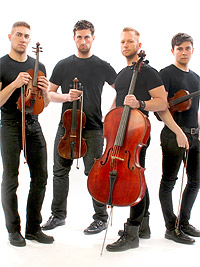