Could Tuna Soon Be Disappearing from Your Sushi Restaurant?

Bluefin tuna population numbers have been dropping at an alarming rate. With demand growing and supply dwindling, prices are soaring. Large potential profits are fueling a feeding frenzy where fisherman from all over the world are looking to cash in on the luxury sushi market. As long as people are willing to pay high prices no matter what the ecological price, the tuna will be doomed to extinction.

San Bernardino, CA -- (SBWIRE) -- 02/06/2012 -- The insatiable appetite for Bluefin tuna together with the large profits to be made selling it to the luxury sushi industry has fueled a feeding frenzy that is cutting Bluefin tuna population numbers to dangerously low levels. Rampant overfishing is pushing the species past the tipping point. Decisions made now will impact not only the ability of the Western Atlantic Bluefin tuna to recover, but how quickly it can happen.

Customer demand, too many fisherman, and too little Bluefin tuna are making the chances of population recovery bleaker than ever according to reports published in the July 2011 issue of Science Magazine.

The supply of Bluefin tuna in the Atlantic and Mediterranean is shrinking fast which is pushing prices up. Large payoffs draw in people willing to ignore laws, restrictions, and warnings of the potential collapse of the fishing industry.

No wonder the temptation just keeps getting stronger. A single 593-pound tuna sold for $736,000 last month at the opening of the Japanese Bluefin tuna season. Fisherman from many countries, with vessels built to haul loads over the legal limit, are rushing to grab what is left of the Bluefin populations and sell it for a premium price. With all of today’s technology, the tuna doesn’t stand a chance.

Lee Crockett, who directs the Pew Environment Group's Bluefin tuna work, told “The Salt” the danger in this type of high price for Bluefin tuna. "When you sell fish for this amount of money, that exacerbates problems with overfishing. You can bet fishermen all over the world are going to say, 'Boy, I'd like to sell fish for that amount of money.'"

The Pew Environment Group reported, “In 2010 at least 141% more Bluefin meat was taken from the Mediterranean Sea than was reported as caught.” That comes out to 428,400 pounds of tuna worth millions of dollars. The numbers could be much higher as it is hard to count tuna that have been caught while fisherman are targeting other types of fish, by catch, unreported catch, net totals, or illegal catch.

Vulnerable spawning habitats could play a role in delivering the final blow as demonstrated last year with the BP oil spill. Not only did the oil spill coincide with the Western Atlantic Bluefin tuna spawning cycle, but also happened in the same area of the Gulf of Mexico.

Bluefin tuna laying their eggs were bombarded with oil and toxic dispersants. Eggs die when exposed to either. The amount of time it will take before the spawning area is safe again is yet to be determined.

After dispersant use began, The Center for Biological Diversity filed a notice of its intent “to sue the Environmental Protection Agency for authorizing the use of toxic dispersants without ensuring that these chemicals would not harm endangered species and their habitats.”

After the devastation of the BP oil spill to the spawning habitat and the eggs that had been laid, The Center for Biological Diversity filed a lawsuit challenging a new rule that expands overfishing of “highly imperiled Atlantic Bluefin tuna.” The lawsuit seeks to halt the dramatic expansion of commercial fishing from Massachusetts to Florida in an effort to prevent Bluefin from being fished to extinction.

With over 80% of the population gone due to overfishing, and the additional blow of the oil spill, immediate action was needed to protect the remaining tuna.

The new rule issued by the NMFS doubles the number of Bluefin tuna that can be caught each day by expanding the season length and expanding the fishing area from the North Atlantic states all the way south to Florida so they can be caught right before they are ready to spawn.

According to Catherine Kilduff, a staff attorney at the Center, “This rule enables fishermen to chase the remaining Bluefin tuna down the Atlantic Coast on their way to reproduce in the Gulf of Mexico. At some point, the last Bluefin tuna will be caught, and there’ll be no fishery left at all.”

Find out more about what is being done and not done to ensure the availability and safety of our Western Atlantic Bluefin tuna by tuning into Smart Health Talk Radio either live on Thursdays from 4-5:00 pm PST or visit us at SmartHealthTalk.com and click podcast. They are also available on the KCAARadio.com website. Look for our host Elaine McFadden and click podcast.

Instructions for all of the ways to listen to Smart Health Talk live or through podcasts are under the “About Us” tab.

We have had many great guests sharing information to educate us all on what is happening with our food and how it affects us everyday so scroll through our past podcasts to find what interests you the most. 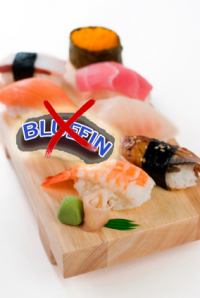