Presented as a chilling memoir, Thomas A. Green’s new book unearths a secret family skeleton that results in a ruinous loss for the author. As the first book to dissect Dodd’s crimes and attempt to gain insight into the motives of sexual predators, Green’s work is expected to resonate with millions.

Vancouver, WA -- (SBWIRE) -- 02/07/2013 -- While the gruesome details of sexual predators are often kept hidden from the public, analysing their crimes is vital to understanding how and why they act as they do. In his powerful and emotive new book, Thomas A. Green takes readers on a deeply personal journey into a real-life experience that almost left him with nothing.

‘Westley Allan Dodd: The Victorian-Renaissance Evidence: A Review of the Motive to Murder Children’ is unlike anything ever written before.

The revelation of a secret family skeleton results in ruinous loss for the author. The loss includes homicidal ideation, $100,000 of a 401k, homelessness, plans for suicide and psychiatric lock up. Twelve years later the author addresses the far reach of catastrophic damages promulgated by sexually violent predators.

Pursuing his Masters in Forensic Psychology, Green encounters the case of Westley Allan Dodd and the Victorian Renaissance art in his court archives in Olympia, Washington. Through his research, he finds that civil litigation, through the Tort of Outrage, is a superior strategy for extracting justice from Sex offenders prior to or in lieu of criminal prosecution, with Civil Commitment the ultimate justice.

Green offers an in-depth, qualitative analysis and psychological autopsy of Dodd’s crimes with a focus on the exotic sexual paraphilias that are deadly threats to children. Driven by the damage to his own family by a sexual predator, Green researches Dodd for explanations for the motives of sexual predators.

As the author explains, the trauma caused by sexual predators isn’t a short-term problem.

“While the victim is always the subject of the deepest violation by sex offenders, secondary trauma may ultimately cross generations,” says Green.

Continuing, “The victim in Green's family is diagnosed with Dissociative Disorder, PTSD, and a brain tumor. Justice for this horrific personal damage cries out for justice, even through primitive justice, an eye for an eye. There is a better way. The Tort of Outrage is just that, justice for outrageous behavior.”

Critics praise Green for his frankly-honest approach and personal investment in the book. Due to its real-life relevance and ability to drive emotion into its reader, demand for the title is expected to be high.

“As a graduate student in Forensic Psychology, I discovered the Victorian-Renaissance evidence of Westley Allan Dodd and learned that the Tort of Outrage may be the most powerful tool for early intervention in sex offender cases,” Green concludes.

‘Westley Allan Dodd: The Victorian-Renaissance Evidence: A Review of the Motive to Murder Children’, published by CreateSpace, is available now in both paperback and Kindle formats.

About Thomas A. Green
Thomas A. Green was born at St. Mary’s Hospital, East St. Louis, Illinois. As a criminology student, he once sat in the electric chair at Menard Penitentiary, Chester, Illinois, and has since questioned the wisdom in that. He currently lives in Vancouver, Washington, the site of Dodd’s murders. 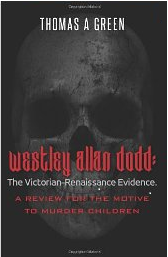