Meticulously researched and written by Niles Mercado, ‘When Prosecutors Attack!’ exposes the corruption and prosecutorial misconduct that let three gripping yet baseless cases go to trial. While many compare the cases of George Zimmerman, OJ Simpson and Roderick Scott, Mercado’s book is the first public attempt to break down the connections and link them to the endemic culture of corruption within the U.S. Judicial system.

Las Vegas, NV -- (SBWIRE) -- 11/21/2013 -- While George Zimmerman hits the headlines once again, author and Government Consultant Niles Mercado has strong words for the American public – Zimmerman’s long journey through the U.S. system has been tarnished through corruption, prosecutorial misconduct and a blatant disregard for the truth.

Everything is exposed in ‘When Prosecutors Attack!: OJ Simpson, Roderick Scott, George Zimmerman - Baseless Government Attacks and the Media That Lets It Happen’ – a compelling new book that links three of the world’s most publicized court cases and the connections of injustice that run deep throughout each.

When Prosecutors Attack! not only makes the case for the innocence of OJ Simpson, Roderick Scott, and George Zimmerman but exposes the corruption and prosecutorial misconduct that let these three baseless cases go to trial.

The result of months of research, direct interviews, FOIA requests and leg work on all three cases., this book is the first to breakdown the case of Roderick Scott (who many are calling the "Black Zimmerman") with rare court documents shown for the first time that prove not only Roderick Scott's innocence but the unmistakable similarity to the Trayvon Martin shooting death. It is the first book to uncover what was really behind the stolen jewelry found on Trayvon, why he was not charged with his previous criminal behavior, and why the legitimate owners of the jewelry still have not received their property back (even though it is sitting in a Miami Police locker).

When Prosecutors Attack! uncovers the source of the problem: overzealous Prosecutors with political agendas that are obstructing justice on high profile cases. The George Zimmerman case is being compared to OJ Simpson and Roderick Scott on a regular basis but no one has broken down the connections until now.

As the author explains, readers will discover how the past forty years has seen landslide decline in how defendants’ rights are protected.

“Nine out of ten charges now result in convictions, up one quarter compared with the 1970s. Those who are arrested are now colored as ‘guilty’ and nobody questions the State when a defendant’s liberty is stolen. Less than seven in every one hundred cases are shut down by juries that assume that the Prosecutor is out for justice while the Defense attorney is just out to make a buck... a preconception that could not be further from the truth,” says Mercado.

Continuing, “The court of public opinion is a very dangerous place and, because individuals don’t have the facts and prefer to go along with the crowd, people like Simpson and Zimmerman are branded as guilty before they even step into the dock.”

While his claims are bold, Mercado reminds the public that they are not without weight.

“I can’t even count the number of hours I spent researching the three cases. Pictures, charts, and swim lane diagrams are used throughout to illustrate my points without ambiguity. Everything is based on original documents and evidence that I uncovered during my research. This is vital reading for anyone who cares about the future of their country,” he adds.

About Niles Mercado
Niles Mercado has about two decades of experience consulting for various government agencies including the Air Force and the Department of Justice. He resides in America’s beautiful southwest with his amazingly supportive wife and precious daughter. To maintain his privacy and his family’s safety he has chosen to write this volume using the pen name “Niles Mercado”; in light of the recent murders of several Zimmermann supporters (and the fact that one of his researchers had their car set on fire in a police parking lot) can you really blame him?

He is sincere when he invites his readers to contact him about his writing and continue the dialogue. Niles is currently working on several projects so feedback about his current books, other prosecutorial misconduct, governmental abuses and other related topics are especially welcome! 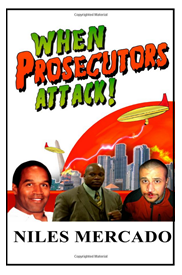