When the Bullet Hits Your Funny Bone: New Book Gives Captivating Insight Into Life and Work of a Navy SEAL

Having retired from the Navy SEALS with almost three decades of service, Billy Allmon was required to call on his humor to help him get through many tragic events. Now, in the first book of its kind, Allmon exposes the real life, tribulations and vital need for humor among one of the U.S military’s most fierce fighting forces.

Virginia Beach, VA -- (SBWIRE) -- 07/11/2012 -- From the capture of Somali Pirates to the unexpected killing of Osama Bin Laden, the Navy SEALS are in the public’s eye more than ever before. While their interest and curiosity is at a peak, so are the misconceptions and unanswered questions. With a view to exposing the real work and people of Navy SEALS Teams across the world, Ex-Serviceman Billy Allmon announces the launch of his debut book.

When the Bullet Hits Your Funny Bone: The Essence of a U.S. Navy SEAL, is Allmon’s first-hand account of his life experiences in Navy SEALS teams.

Above all, it’s an intimate and honest account of funny and true events of Allmon’s career, with a strong focus on how SEALS use their specific brand of humor to cope with the tragic and disturbing events that they experience throughout their journey.

“I feel that my book will add clarity to, and give an overall picture of the type of person that makes up a US Navy SEAL. My book offers the reader a personal glimpse into the minds of America's most elite warriors and explains how SEALs bond with each other to become brothers-in-arms, as well as why SEALs use extreme humor to cope with a job that places these professional warriors face to face with death on a daily basis,” explains Allmon, who served as a SEAL between 1969 and 1993.

He continues, “It’s the only book of its kind to approach the life and work of SEALS from this angle, while also answering the public’s burning question of how SEALS can see so many bad things, yet continue with their careers relatively unscathed.”

Official Synopsis: When the Bullet Hits Your Funny Bone: The Essence of a U.S. Navy SEAL, offers the reader a personal glimpse into the minds of America’s most elite warriors. The book explains how SEALs bond with each other to become brothers-in-arms through their difficult training and tactical missions. The book largely explains why SEALs use extreme humor or gallows humor, on themselves and others, to help themselves cope with a job that places these professional warriors face to face with death on almost a daily basis.

“Billy Allmon is a master story teller, who can make even the worst of situations sound humerous. His years of experience and service to his country are not only greatly appreciated, but are also admired and respected. It would be an honor to buy him a beer,” says one reader, who awarded the book a 5-star rating.

When the Bullet Hits Your Funny Bone: The Essence of a U.S. Navy SEAL is published by Twilight Times Books and available for purchase here: http://twilighttimesbooks.com/ttb_booklist.html#WhentheBulletHits

To find out more about the book, read an excerpt and even explore photographs from Allmon’s career, please visit his official website: http://www.billyallmon.com/

About The Author: Billy Allmon
Billy Allmon is a retired Navy SEAL and honorably served his country from 1969 to 1993. He retired as a chief petty officer, and is a combat veteran of three wars. While in the SEALs, Mr. Allmon participated in numerous covert and overt missions around the world in support of US and foreign governments, militaries, and other official agencies.

His new book, When the Bullet Hits Your Funny Bone: The Essence of a U.S. Navy SEAL, is a collection of stories about his time in the U. S. Navy SEALs, and how they use their humor to cope with all the tragic events and horrific sights, which all Navy SEALs must deal with throughout their professional careers. 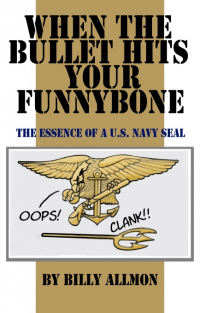