Where Love Began: Compelling New Children's Book Helps Boys Express, Embrace and Not Be Embarrassed by Openly Loving Others

Masterfully crafted by author Caleb Matthews and uniquely fusing an engrossing narrative with stunning imagery, ‘Where Love Began’ tells the uplifting story of a boy and a bear who search the world to find love. Above all, the short yet powerful story helps young boys realize that openly loving others is a luxury to boast with pride.

San Francisco, CA -- (SBWIRE) -- 04/15/2014 -- While often cherishing affection and being lavish with their love, almost every young boy is taught to hide their emotions and keep a firm, ‘manly’ exterior. However, a powerful new book by author Caleb Matthew urges young boys to be open and outward with their emotions – especially love.

‘Where Love Began’ reaches out to both genders with the message of acceptance to love things rather than break them. The narrative follows a boy and a bear as they search the world trying to find love.

“Boys get a tough start a life in terms of honesty and their emotions. As well as being told they need to bottle up their love, tears and desires, they’re often told by most parents that women are the lesser gender,” says Matthews.

Continuing, “I want children to understand that it is perfectly acceptable to show, search, and love openly. The message will resonate especially well with young boys, as they struggle with this concept the most.”

Early reviews for the book have been overwhelmingly positive.

"Where Love Began" is a sweet story about a universal truth that starts for all humans at a very young age -- the search for love and a place of belonging -- and continues our whole lives. This isn't just a story I would have loved as a child. It's a story that resonates with me today,” says Dan Ewald, writer of the Disney Channel's animated series "Yin! Yang! Yo!”

Reader Will was equally as impressed, “Where Love Began seems lightweight at first, but something about the poetic rhythm of the words begins to soothe you and draw you in. Once there, you find yourself wide open to a gentle, compelling, affirming, and powerful message. With its poetry, and gentle cadence It's a great book to read aloud! The illustrations--which are integrated with the text in creative and seamless ways--are terrific and took some thought (how would you draw a teddy bear searching underwater?).”

Chad praised the power of the book’s simple yet hard-hitting message, “Beautifully written and illustrated story that contains a message for all ages. Simple truth told in a fun, colorful and imaginative way.”

Matthews is delighted with this response.

“I’m thrilled that my work is having such a positive impact on readers, especially considering that it’s a topic rarely put under the spotlight. It was an unpredictable market, but I think the mix of verse and pictures is striking a chord with readers from all walks of life. In my opinion, this is a job well done!” he adds.

About Caleb Matthews
Caleb is a Slam Poet, and has competed at the National Poetry Slam in 2008 and 2009 as well as the Individual World Poetry Slam in 2009. As a former educator and youth advocate, Matthews has worked with children of all ages, 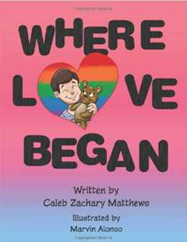