Whispers of a Warrior: Raw, Real and Inspiring Semiautobiographical Novella by Emry Kale Owens Offers Bold Insight Into the Strength of Human Spirit.

Having positively impacted thousands of readers and sailed to the top of numerous Amazon ‘Best Sellers’ lists, ‘Whispers of a Warrior’ tells the story of a little girl who found the inner strength and self-motivation to overcome the hardest things that could happen to a child. Fusing an inspiring personal story with a showcase of the true power of horses, the book is poised to resonate with readers around the world.

Salem, OR -- (SBWIRE) -- 08/20/2013 -- With its raw depictions of domestic violence, child abuse and rape, many readers are left lost for words after discovering that Emry Kale Owens’ ‘Whispers of a Warrior’ is inspired by a true story. However, the book’s raw depiction of the struggles endured by many is helping thousands of readers overcome their own adversity and change their lives for the better.

Owens’ own emotive life story proves that hope is always on the horizon.

There are never enough words to describe the trials that are endured as we travel through this life. As we sit within a moment of reflection, at times, our past stares back at us through eyes of regret. All too often we fail to realize that our strength is not destroyed by the wicked ways of the world, but rather, it is intensified, amplified, justified.

One girl saw the world through the innocent eyes of a child until one day that innocence was savagely ripped from her hands. Refusing to succumb to the illusion that 'we are reflections of our past', she sought to discover a world unlike any she had ever known. Through the eyes of the horse, she became reborn into a life of purpose, and discovered that within her tiny hands, she held the spirit of a warrior.

As the author explains, her book serves an important dual purpose.

“The importance of this story rests not only within its raw truth but also within its inspiration. Every person has a story tell, has had battles to lose and also battles that they have conquered this story touches on every aspect of human emotion, vulnerability and triumph. It is a story that offers insight into the strength of the human spirit and how that spirit will find shelter within the likeness of others when it is broken, even if those others are not do not look at us through human eyes,” says Owens.

Continuing, “It shows the connection between people and horses and how that connection saves lives, how it saved mine. If only one person walks away from this book feeling a renewed sense of hope it has served its purpose; for its importance lies not solely within the masses but within the individual.”

Since its release, the book has garnered a consistent string of rave reviews and quickly climbed into the top 100 best sellers list.

“Such a poignant, raw vision into the trials and tribulations of one so young. It's like I was actually able to see the Phoenix rising from the ashes as the book progressed. As disturbing as some portions were, because they couldn't be anything but true, it was absolutely a page turner and I read it in one sitting,” says Jennifer May, who reviewed the book on Amazon.

Cathi was equally as impressed; “The author wrote a raw and real heartfelt story that many people will be able to relate to, either by personal experience or knowing someone whom had experiences. Wonderful read and cannot for the author's next book!”

Owens’ book is also one of the few to prominently feature horses as a rich source of strength.

“Horses, beautiful and full of strength, had also felt the bitter taste of dominion and their lives sacrificed without thought or remorse. Yet, as I watched them roar across the valley I saw that they had found a place untouched by the past and spoke in a language that could never be understood by the darkened spirit of man. It was within them that I found strength,” she adds.

‘Whispers of a Warrior’ is available now: http://amzn.to/1eWV57D

About Emry Kale Owens
Emry Kale Owens spent her life within a small rural community among the rugged hills of Wyoming. Her work has been cited as being 'truly inspiring', 'breathtakingly beautiful' and 'raw'. Emry has numerous publications, including a syndicated biography that has been seen around the world. The sheer raw humanistic side of her work leaves an impact on the reader that is undefinable. 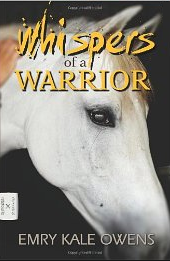