Los Angeles, CA -- (SBWIRE) -- 03/04/2013 -- The Assyrian Empire is well known to the readers of the Old Testament and the students of history. It began as a small country located in Northern Mesopotamia, known today as northern Iraq. It gradually expanded to dominate most of the Middle East; from Egypt to the Persian Gulf, from there it reached to the Eastern Mediterranean, to the Taurus Mountains, the Southern Turkey, and Iran. Later empires such as the Persian, and Roman, owed much to the Assyrian Empire’s military and administrative legacy. However, after its 612 BC defeat by the Babylonians and the Medians there is no mention of what happened to the Assyrians in the history books. A new book by William M Warda, titled: “Assyrians beyond the Fall of Nineveh,” provides irrefutable historical and archaeological evidences attesting to the survival of the ancient Assyrians, and the progression of their descendants into the Christian era.

Lack of information about the ancient Assyrians, in the contemporary history books is primarily because Greek writers who wrote about them referred to them by names such as: Surios, Surioi, Surie, and Suros, which were wrongly interpreted, to mean Syrians, by the later historians. However, Herodotus, in the following statement attests to the presence of the Assyrian troops in the Persian Army. He writes:

“This people, whom the Hellenes called Syrians, are called Assyrians by the barbarians.” He even gives the name and the lineage of the Persian commander who led them into war:

“They had for commander Otaspes, the son of Artachaeus.” By Barbarians, Herodotus meant ancient Persians, who in their inscriptions mention Assyria, and Assyrians as part of their empire.

The 2nd part of the book deals with the history of the Christian Assyrians after the fall of Nineveh. It includes: information about their encounters with the people of other nationalities that ruled their homeland, including: the Persians, Greeks, Parthians, Sassanians, Arabs, Mongols, and Turks. The book also describes the Christian Assyrians’ extreme suffering, heroism, and achievements.

Assyrians Beyond the Fall of Nineveh is a historical nonfiction, but reads like an amazing novel, because, it tells the story of a pacifist people struggling to survive in a world dominated by warlike conquerors who were committed to destroying them. As the saying goes: truth is often stranger than fiction. This book is now available at the amazon.com 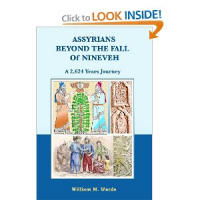