Queensland, Australia -- (SBWIRE) -- 10/05/2011 -- Tinting Brisbane is pleased to announce their new Website tintingbrisbane.com.au to better serve home and car owners in the area. The company specializes in high quality window tinting for home and car windows.

Home window tinting has increasingly become a solution to both heat glare and UV challenges. In fact, recent studies have shown that power bills related to cooling homes can drop by as much as 30 to 50 percent after tinting. Heat rejection films are specifically designed to reduce the amount of light and heat that penetrate glass windows.

One of the important facts about window tinting covered by the new Website is that home window tinting can be especially important in the harsh Queensland climate. Window Tinting Brisbane films will not only help lower indoor temperatures, they also aid in protecting furniture, carpeting and window coverings from the harsh effects of UV light, which causes fading. “We wanted our new Website to not only showcase our products, but to become a place where consumers could learn about the advantages of window tinting,” said a Tinting Brisbane representative.

Many people are unaware of the security potential of window tinting films. Tinting Brisbane house window films utilize thin layers that act as a security film, which prevents glass from shattering or forming shrapnel.

While many factory-new automobiles have some tinting, few find it adequate to sufficiently reduce glare and heat. Generally, the darker the film the more noticeable the cooling effect will be. “We carry a wide variety of tints and shades to fit every window need and owner preference,” said the Tinting Brisbane representative.

According to the new Website, the quality of the film, the mode of application and the ability of the window tinter are the determining factors for a good car window tint. Many inferior window tinting films and poor application result in peeling and cracking of the film. Tinting Brisbane uses and recommends films that are well renowned for their superior quality and length of life while their tinting specialists have years of experience with all manner of vehicles. Tinting Brisbane offers free quotes and 15 percent off of the price of the project for those that get their quotes online. To learn more, please visit http://tintingbrisbane.com.au/ 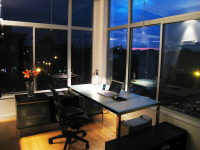