With the 44th Anniversary of First Moon Landing, New Novel Engages Readers in a Young Woman's Search for Tranquility Base

Written by California’s Janet Rebhan, ‘Finding Tranquility Base’ depicts one young woman’s steadfast and tireless efforts to overcome conflict in her life. With the 44th anniversary of Apollo 11’s moon landing drawing near, the book’s title and bold metaphor is poised to inspire thousands of readers to focus on what helps them find serenity.

Agoura Hills, CA -- (SBWIRE) -- 07/15/2013 -- At the end of her novel, author Janet Rebhan includes words recorded by NASA while debriefing astronaut Buzz Aldrin that serve as a metaphor for finding peace. Aldrin mentions how hard it was to focus on stationary objects on the moon’s surface because there was so much debris being kicked around above the landing site. But some islands were stationary and it helped to center on them. “This is true of life,” says Rebhan, “Because we tend to focus on the chaos all around us it becomes more difficult to find peace. Yet if we focus on the stationary things – the things that ground us, they will guide us through the chaos to tranquility.”

Before July of 1969, few knew anything about the Sea of Tranquility and ‘Tranquility Base’ - the iconic landing site for astronauts Neil Armstrong and Buzz Aldrin. Their momentous giant leap for mankind is about to celebrate its 44th anniversary and there is even talk of establishing a park on the moon to preserve the artifacts Armstrong and Aldrin left behind.

While few will get to visit the Sea of Tranquility in their lifetime, anyone can create their own Tranquility Base through the powerful inspiration provided by Janet Rebhan’s new novel.

Synopsis for ‘Finding Tranquility Base’:

Sixteen year-old Riley Pritchard's family is altered forever when a tornado destroys her home and triggers a series of dramatic events. When the apparent murder of her baby sister further decimates their lives, each family member, from her beautiful, self-centered mother and hardworking, sentimental father (who had named their new home ‘Tranquility Base’) to her air-headed older brother, grieves alone, isolated in a suffocating sadness.

In a desperate attempt to extricate herself from the pain and sorrow of a home where the walls seem to be closing in tighter every day, Riley volunteers at the local Veterans Administration hospital. There she meets Johnny, a young soldier and survivor of a helicopter crash in Vietnam who has returned home with severe burns. Together they begin to discover the redemptive and healing power of love.

A moving coming of age story about finding inner peace and fulfillment in the face of heartbreak and loss, Rebhan delivers a nuanced, captivating portrayal of blossoming adulthood. Showing remarkable felicity for time and place, she imbues her novel with the numbing desolation of west Texas as she explores the themes of self-reliance, self-preservation, and strength amidst adversity. As engaging as it is entertaining, Finding Tranquility Base is a thought-provoking, inspiring story that will change the way you view the world all over again.

As the author explains, her book is extremely relevant to all in modern society.

Rebhan says, “We are living in a world where catastrophic events seem to have become the new normal. As I wrote this story, I was concerned I may have created too many challenges for my protagonist to overcome. Yet in light of recent actual calamities, we have all witnessed some incredible stories of people who have overcome great tragedy.”

Kirkus Reviews says, “The author packs the novel with tragedy while keeping the story centered on Riley’s personal experiences of pain, loss and hope, and detailing the ways the young girl distances herself from her flawed, unhappy parents and their callous actions. Riley’s ability to forgive without forgetting marks her as a strong, complex character. Overall, the author deftly portrays Riley as a person of indomitable spirit, determined to build a Tranquility Base of her own, no matter where life takes her.”

Amazon reviewer, Nancy McAleer, was equally impressed, adding, “The book leads the reader gently through a myriad of emotions... from happy to sad, from melancholy to peace. Will Riley ever find her Tranquility Base? You'll just have to read it and find out!”

As a special treat to the reading public and to honor the anniversary of the first Moon landing, Rebhan has recently announced that her novel will be available for free Kindle download at Amazon.com on July 19th and 20th, 2013.

‘Finding Tranquility Base’ is available now. To secure a download, visit: http://amzn.to/XlRv4q

About Janet Rebhan
Janet Rebhan was born and raised in a west Texas oil and military town, where she also volunteered one summer at the local Veterans Administration hospital. When she was sixteen, her family moved to Los Angeles, where she studied creative writing at UCLA and Moorpark College. She currently resides in Agoura Hills, California. Finding Tranquility Base is her first novel. 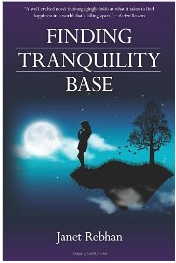