In a series of dramatic re-creations, with voiceover by Zdorovetskiy, viewers see how the comedian endured loneliness and isolation as a Russian-speaking young boy in the United States. Playing his mother — who remains unnamed in the film — Serrano is seen helping her character's son learn English with homemade flash cards.

Later, we see the young Vitaly, played by Bryson Robinson, his stepfather, played by Sean Michael Nugent, and his mother (Serrano) go through a heartbreaking loss. Serrano's whole body is wracked with grief, her shoulders heaving and her hands shaking when, as Zdorovetskiy's mother, she reaches out to comfort him.

As the video unfolds, we watch Serrano's character endure abuse perpetrated by Zdorovetskiy's increasingly violent and dangerous stepfather. "I was afraid for my life," the comedian explains, "I was really thinking...he [is] gonna kill me, or my mom."

Ultimately we learn that the domestic violence is what drove the then-18-year-old Zdorovetskiy to appear in a pornographic film, seeing the big paycheck as the fastest way to get himself and his mother out of their dangerous household.

Serrano's scenes with the young actor portraying Zdorovetskiy as a child contain a compelling sweetness and emotional tenderness. This makes the emotional tension later in the film even more of a contrast, as we see her character endure the unimaginable, then struggle to survive domestic violence that leaves her shaking on the floor after a beating.

"I really enjoyed working on this project," says the actress, who filmed the short feature in Los Angeles. "I understand how jarring it can be to pull up the roots of your old life and move halfway around the world to start from scratch in a new city," says Serrano. The actress had, herself, moved to L.A. to continue the professional acting career she first launched in Spain at the age of 13. "I had a lot of empathy for the character I was playing."

Serrano was recently interviewed on Spanish radio about her acting career and experiences in Hollywood. Producers of the talk show "Jaén Hora Sur" on the CanalSur radio station invited Serrano on their International Women's Day show as an example of a strong, successful professional woman. "They also liked the fact that I'm using my mother's last name, Serrano, as my stage name," noted the actress. Show host Luisa Navarro played audio clips from Serrano's appearances in the short films "Fade Out" (2016) and "Camila" (2015), to introduce Serrano's segment of the show, which is broadcast in the Andalusian region of Spain.

Born in Switzerland and raised in Spain, Tania Serrano was invited to join the "Punto y Aparte" Theater company in Madrid at the age of thirteen. She performed in a number of stage productions and was eventually awarded First Prize in the third annual Interpretation Festival for live theater in Nuevo Baztán for her performance in "Thanks Grandma" by Sebastián Junyent. After earning her bachelor's degree in film in the United States, she returned to Madrid to finish her Masters in acting for film at the prestigious "Central De Cine" under the direction of Eva Lesmes, where she received coaching and instruction from Maria Ripoll among many others.

About Kathleen Hanover
Kathleen Hanover is a freelance writer and public relations consultant whose work has been published in local, regional and national newspapers and periodicals including the Los Angeles Times, Washington Times, Cleveland Plain Dealer and many more. 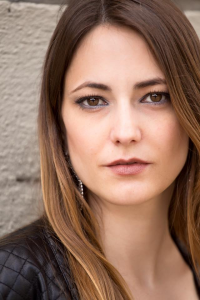