The original workbook, designed for children ages 5-11, was a culmination of Dr. Woodring's professional work and personal experience after moving internationally with her family.

"I wanted to create an interactive tool to guide children through the anxiety and stress of a move. The workbook helps children understand their experience and emotions and empowers them to become active participants in the moving process with a sense of excitement rather than fear."

"My Very Exciting, Sorta Scary, Big Move: A Workbook for Children Moving to a New Home," became a widely requested resource for real estate agents and military families as well as ex-pats and international schools. However, a resource was desperately needed for families in Spanish speaking homes, which according to recent Census data is over 37 million people. "I was thrilled that the English version was so well-received and wanted to extend the reach of this resource to the Spanish speaking population," said Woodring. 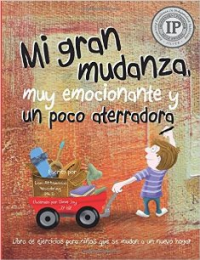