Worlds Thinnest Wallet Pioneers Are at It Again; Jobs for Americans and New Women’s Wallet Range

Poway, CA -- (SBWIRE) -- 02/20/2012 -- Everyone’s seen them; those unsightly, overstuffed wallets absolutely bursting at the seams with various cards, receipts and, hopefully, a little cash. It’s likely many Americans have one in their pocket right now. In attempting to clean out these monster wallets, most people discover that there’s little that can be removed without risk of failing to have some important information on hand in a time of need – a health insurance card, drivers license, work ID, loyalty cards, primary and emergency credit cards, the list goes on. Obviously with the reliance society has placed on cards in such a multitude of forms, there’s no way to truly have a slim wallet. Or is there?

Established in 1995, ALL-ETT has been proving again and again that innovative design is more than a match for the overstuffed wallet many Americans find themselves burdened with today. Alarmed at the rising cases of sciatic nerve damage experienced by those with bloated, over-full wallets, ALL-ETT set out to create the world’s thinnest wallet – and they succeeded.

A family-run business that produces their wallets exclusively in the USA, General Manager Adam Muscat was honest when speaking on the ALL-ETT decision to manufacture all ALL-ETT wallets in America. “We probably pay about four times as much to make a wallet here in the US”, Adam admitted, “But I’d say our wallets are four times better.” Not only that, but they’re often a fraction of the price of his overseas-sewn competitors. How do they do it? “We make less margins”, Adam confirmed. This hasn’t stopped the home-grown success story, however, since the Muscat family took the reins of the company several years ago turnover has grown almost five times. Clearly their wallets are something special.

Their range of products is huge, from traditional men’s wallets made from leather, nylon and recycled material to the latest addition of women’s wallets, ALL-ETT is committed to catering for everyone. Sick of the condition they refer to as ‘wallet-butt’, where pockets are destroyed and even medical symptoms such as sciatica can arise, the team at ALL-ETT have produced wallets that both look amazing and leave customers feeling amazing too, with designs that flex to accommodate the body; a particularly useful feature for those who prefer to keep their wallet in the back pocket.

The new women’s line is particularly impressive, especially the way in which ALL-ETT have managed to balance the important fashion concerns of American women while never compromising on their quality, worlds-thinnest design. The range, including original, checkbook, clip, wristlet and sports styles comes in a wide variety of colors and materials, meaning women are now in the same enviable position as the men in being able to boast about having the worlds thinnest wallet right there in their pocket.

Featured in press nation-wide, the leather wallets created by ALL-ETT have taken the country by storm. Whether it’s the innovative design, the amazing range of colors and materials or simply the wonderful feeling of living without a small suitcase in their back pocket, people everywhere are choosing ALL-ETT. Looking at those amazing wallets, who could blame them.

About ALL-ETT
ALL-ETT Billfolds is a family owned and operated company manufacturing its world-leading wallets exclusively in the USA. Priding themselves on magnificent customer service and a uniquely advantageous wallet design, ALL-ETT was established in 1995 and has been growing ever since. Driven primarily by grass-roots, world-of-mouth style marketing, ALL-ETT prefers to let their product do the talking and promotes their wallets typically through festivals, trade shows and conventions. Regularly featured in national media including The New York Times, Better Homes and Gardens Magazine and The Wall Street Journal, ALL-ETT Billfolds is an American success story that just keeps on innovating. For more information, visit http://www.all-ett.com/ 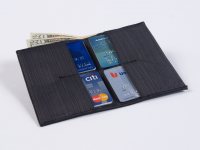