Having grown up never being able to find the newspaper, and after marrying a man who keeps a library in the bathroom, Thorey Kristin was committed to filling the demand for a compelling toilet book. Containing slices of her hectic life until October of 2012, ‘The Best Toilet Book in the World’ has become a global flushing success.

Eskifjordur, Iceland -- (SBWIRE) -- 01/31/2013 -- As a young child, Thorey Kristin became used to the daily newspaper taking up residency in the bathroom, often in the hands of her Brother or Father. With the problem repeating itself after marriage, Thorey Kristin saw the growing demand for an entertaining toilet book and is now making a splash around the world as her novel invention becomes a viral hit.

‘The Best Toilet Book in the World’ chronicles the author’s first year in a new country. Told through whimsical short stories and images, it’s the perfect title to dip in and out of while sat on the throne.

“I grew up with my dad asking frequently where the newspaper was, while my brother was occupying it for half an hour on the toilet every day. Today I live with a man who has a whole library sitting in the bathroom. Thus I started to think that what the world seriously needs is a toilet book,” says Thorey Kristin.

Continuing, “The book contains clips from my life from summer 2011 until October 2012, or since I decided to move to another country and get married. When you move to another country you have to face several challenges, amongst others being a speechless idiot, having almost no social life what so ever, desperation for friends, trying to be cool, attending some horrific Danish courses, trying to survive the first year of marriage and figure out where the beer is cheapest, to name a few.”

With lots of material required for those who take their time doing their business, Thorey Kristin ensured the book was packed full of engaging material.

“I have tried to set the book up in a comic way since you have to have a humour for yourself to survive the first year in a new country! Everyone who has come into my life during that year is now a victim and a real part of the book!” she adds.

“This book is wonderful, so funny and real. You get a sneak peek into her life and how a young woman today handles being a wonder woman; yes - with a lot of humor. That is what the world needs today, looking at the bright sight of everyday life,” said Audur Geirsdottir, who reviewed the book on Amazon.

Helena Sif Ericson was equally as impressed, saying that “I laughed my ass off, which is sort of the point isn't it? I loved it. Short stories from everyday life that brighten up any day, no matter how dreary it is. The author’s way of laughing at life and herself is priceless. The only complaint I have is that it left me wanting for more.”

With so much success on her hands, Thorey Kristin refuses to lose sight of what is important.

“The ‘need to read’ has always been a problem, especially among men. I hope my book does its bit to stop other literature making a one-way journey to the toilet, never to be seen again. This book is about everything and nothing, but mostly nothing. Enjoy, and remember to flush!” she concludes.

‘The Best Toilet Book in the World’, published by AuthorHouse, is available from Amazon: http://amzn.to/VUV3Yn

The book can also be found on Facebook: http://www.facebook.com/remembertoflush

About Thorey Kristin Thorisdottir
Thorey Kristin Thorisdottir is a freelance writer with a Bachelor´s Degree in Social Works and is working on a Bachelor´s Degree in psychology. The second one is her biggest dream; to save the world as a psychologist. While facing several challenges in finishing that degree the author decided to make other childhood dreams come true. These were; becoming a writer, actress and a vet. We can all be grateful that the last one faded out with time but the others have plagued her conscience for several years now. With this icebreaker, The Best Toilet Book in the World, the author is just getting started! Thorey Kristin comes from Iceland but is currently living in Denmark. 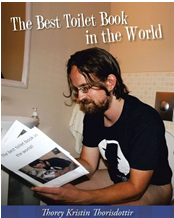