Twenty year-old Ripparachie has a vision to end the bullying and discrimination that the LGBT community experiences on a daily basis. Now, by coming out to his fans and changing his musical goals for the greater good, he hopes others will accept and be proud of who they really are.

Lafayette, IN -- (SBWIRE) -- 06/19/2012 -- While Ripparachie’s musical career has gone from strength to strength, personal turmoil has blighted his happiness since childhood. Having struggled to be himself for many years, he has now proudly come out as gay to his fans; hoping that his experiences can change society’s acceptance of sexuality for good.

Having changed his musical style to spin a positive image on ‘being genuine’, Ripparachie has embarked on a National campaign to provide a voice for others who are too scared to be themselves.

His latest album, F.A.G (Free and Genuine), aims to put a stop to the bullying and discrimination that prevents thousands of young people in the United States from accepting their sexuality with pride.

“Everyone I knew always wanted to know why I was so depressed and so negative. It was simply because I was afraid of coming out and losing the people I called friends and family,” Ripparachie explains.

He continues, “I have finally spoken the truth and want to help bring the LGBT community together to help fight for our rights.”

In doing so, Ripparachie is working hard to change the face of the word ‘Fag’, spinning it to become a positive label for those who are finally free of society’s misconceptions and homophobic tendencies. Along with Fly A** Guys/Girls, his new line of clothing, Ripparachie has a vision of an accepting society that is free from discrimination.

“I was afraid of the word Fag before coming out. I naturally associated it with the dozens of hate crimes and suicides that take place among young people every week in the United States. However, I have now decided to stand up for what is right, instead of following the music industry’s norms. I want to make a difference,” he adds.

Ripparachie is currently booking dates for his Free and Genuine tour, planning to spread his positive message across every corner of the country. The artist is offering to perform his hit songs, give speeches, attend fundraisers and do anything he can to promote positive and inspirational music as opposed to the negativity that the media appear to promote so freely.

“I have lost a lot of fans, friends, and family due to coming out. But I have also gained a lot of respect for being true to myself and others. By spreading a positive image others will be able to face the same decisions as me with the pride and confidence that nobody will push them away,” Ripparachie explains.

His Free and Genuine iTunes album is currently available online and proving immensely popular among both the LGBT and straight communities. The artist plans to donate a proportion of the album’s profits to a non-profit organization that actively supports the LGBT community.

To find out more information about the musician and his goals, to hear samples of his music and book him for an event or engagement, please visit Ripparachie’s official website.

About Ripparachie
Ripparachie has been doing music ever since he was young. His first song was written for him by his cousin when he was 7 years old.

He started writing his own music when he was 11 years old. He was born and raised in a small town called Lafayette in Indiana. He first started calling himself "Lil Rippa" when his grandmother died.

When he moved to Bridge Way, a local apartment complex, his big bro always called him "Rachie". He decided to put both names together and that’s how the name "Ripparachie" was created. Ripparachie opened up for Too $hort when he was 14 years old. He has also opened up for Crime Mob, Lil Wyte, DJ Unk, and more.

He has been dropping solo mixtapes ever since he was 15 years old. He created #TeamWerk in the year of 2011 and the movement is getting bigger and stronger everyday. Ripparachie is not afraid to be different and he feels that being unique is his key into "the game". He has done songs in almost every genre and will continue to explore. One of his goals is to create his own genre of music. Another one of his goals is to REVIVE "swag" music. 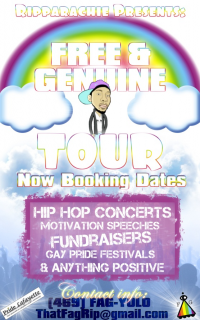