Stephen Walden, a 24-year-old entrepreneur born and raised in Phoenix, has announced plans to manufacture his ergonomic shovels in the United States. The young inventor is considering Arizona for Bosse Tools’ first plant location.

Phoenix, AZ -- (SBWIRE) -- 09/25/2013 -- Born and raised in Phoenix, 24-year-old Stephen Walden is considering his hometown of Phoenix as a location to manufacture his inventions, a line of ergonomic shovels designed to reduce injury and fatigue. His company, Bosse Tools, currently has four employees and he expects that figure to grow quickly when he begins production in the next 3 months. “It’s important to me to be able to stamp ‘Made in America’ on my ergonomic shovels,” says Walden, who founded Bosse Tools to manufacture a show shovel, flathead shovel and spade with a unique rotating center hand grip that he invented.

“The potential market for an ergonomic, injury-preventing product is huge,” says Walden. “Thousands of hours of productivity are lost every year because of workplace injuries related to old-fashioned shovels. According to the United States Department of Labor, over 50% of construction injuries come from back and muscle strain, and anyone who has used a shovel can relate to that.”

“I was a clear choice for Bosse to stay here in the U.S.A. – this is a tool built for the American worker, so why manufacture it anywhere but here in America?” says the Eagle Scout. “Time and time again, I was told that my ideas were good, but there's no way I could avoid overseas production to stay competitive. It took an entire year of searching for the right team of people here in the United States, but I can proudly say that my ergonomic shovels were engineered here and they will be manufactured here as well.”

Components of the first production models are being manufactured by several companies in California, but ultimately Walden plans to build his own facility where all the parts can be made and assembled under one roof. “I grew up in the Phoenix area,” says Walden, “and I still have family here. Naturally, I would like to bring jobs here and support the economy in Arizona if we can find the right location and raise the funds we need for tooling and equipment.”

Bosse Tools is currently running a campaign on the crowd-funding site Kickstarter.com to raise production capital. The campaign has reached 30% of its goal with about a month to go, with shovels selling for $65. “I was amazed how quickly some of our ‘premium’ levels sold out,” says Walden. “The top pledge so far is $1,999, which gets the supporter our full line of ergonomic shovels, which I will deliver personally. I’ll also give this generous donor a day’s labor and treat them to dinner.”

To read more about Bosse Tools, view the company’s Kickstarter campaign at http://www.kickstarter.com/projects/619738984/the-ergonomic-shovel-by-bosse-tools-made-in-americ

About Bosse Tools
Bosse Tools is an ergonomic hardware tool company that was founded to revolutionize traditional construction, gardening, and farming tools. Bosse Tools products maximize productivity and diminish strain on the back, arms, and wrists - increasing output and reducing injury. Bosse Tools proudly makes all of their tools in the United States. 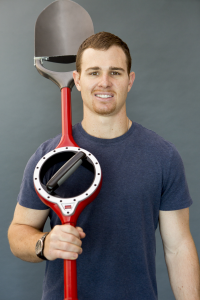