Los Angeles, CA -- (SBWIRE) -- 01/13/2014 -- B Weezy, the 12-year-old young rapper from Long Island, New York, announces the release of his new video, "Strong." The new video joins B Weezy's growing collection of cover videos highlighting his original lyrics and unique personality and style. "Strong" was recorded and produced at Loft Sound Studio in Plainview, New York and is available on YouTube.

B Weezy is Benjamin Weiss, a seventh grader from Long Island, New York who started his rapping career in the summer of 2012. Adding his own unique lyrics to his favorite rap songs, B Weezy has joined Loft Sound Studio to help develop his own sound as an artist and to create new, original music.

“Doing covers are fun, but they’re not all me,” B Weezy says on his website. “I’m excited to finally put out my own music because it will really be all mine.”

With a debut album more than half way complete, B Weezy skills as a rapper, songwriter, producer and professional recording artist set him apart amongst other musicians. He's been described as Jay Z meets Matty B, with a message and an image that is age accessible for young kids to enjoy. Additionally, B Weezy was featured in an August 2013 article in Newsday about Loft Sound Studio and the growing amount of celebrity young rapper and music artists following in the footsteps of iconic figures such as Justin Bieber.

"Strong" joins B Weezy's other cover videos on his YouTube channel as well as his original webisode series "A Day in the Life of B Weezy." With over 285,000 combined views for all his videos on YouTube, B Weezy's fan base continues to grow each day. B Weezy is available on Facebook, Instagram, Twitter and YouTube.

About B Weezy
B Weezy is 12-year-old Benjamin Weiss from Long Island, New York, a young rapper, songwriter and producer. Working with Loft Sound Studio in Plainview, New York, B Weezy has recorded several cover videos featuring his own unique material and is at work on his debut album. With over 285,000 combined views on YouTube and featured on the cover of Newsday, B Weezy is an up and coming, talented rapper and songwriter. For more information, visit http://bweezymusic.com. 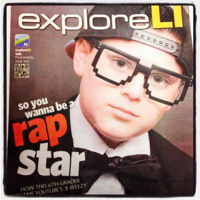