Zeufforia: Compelling Novel Examines Earth's Social Issues from the 'Eyes' of Another Planet.

Touching on everything from love and compassion to Government and religion, Leonardo William’s gripping new novel provides a perspective on life that’s truly out of this world.

Madison, AL -- (SBWIRE) -- 12/31/2012 -- While those on Earth are wrapped up in a myriad of never-ending social and personal issues, many wonder how they would be viewed from the perspective of a true ‘outsider’. Thanks to a new novel by Leonardo Williams, that perspective is brought to life in powerful literary form.

‘Zeufforia’ combines an immersive fictional tale with a deep critique of life on earth.

Successful businessman Donny Kenton has everything he needs to enjoy life – a job he loves and a passion for helping others – except for one thing: a female companion. Donny’s brilliant mind, faith in God and genuine warmth have opened doors, and he’s convinced he has life figured out, according to this new novel. When he encounters Shai-La, a breathtaking stranger from another world, he soon learns he must challenge his whole way of thinking.

“Zeufforia” reveals Donny’s astonishment at what he hears from Shai-La, a high priestess from Zeufforia, a world 10,000 light years away from Earth in the Gemini constellation. She tells Donny he is a king and although he’s shown love and kindness to everyone he encounters, soon he will find out his true purpose in life. Shai-La describes the wonders of her planet, a world of beauty and heavenly bliss without money, government, hatred and sin, which has retained its connection to the Father and Creator. As she and Donny draw closer, they work miracles and explore the different aspects of life of her world verses life here on Earth.

As the author explains, his book was the result of a heavy study of numerous real-life issues and debates.

“Zeufforia addresses many various issues and important topics through the eyes of a being from another planet. The book deals with many various topics such as Love for one another, the lack of love for the fellowman, Hatred amongst the races, Love & Divorce, relationships, Wars, Government and Greed,” says Williams.

He continues, “However, the most vital is the importance of establishing a relationship with God, the power of Faith and how different our world would be if we all (mankind) came together as one.”

Critics praise Williams for his ability to perfectly fuse the real world with fiction. Interwoven into an insightful and entertaining read, the novel is poised to attract a hoard of readers as time progresses.

“I want people to close the book with the feeling that they have just read a powerful and engaging story. However, most importantly, I want them to reconsider many of the beliefs and opinions about life that they had when they turned the first page. This book has the power to change people for the better,” he concludes.

More information can also be found on the website: http://zeufforia.com/

About the Author
Leonardo Williams was born and raised in Rochester, New York. After graduating from Wilson Magnet H.S., he enlisted into the military. During his military career he enrolled into the University of Maryland and then continued his education at Columbia College. It was through his military career that landed him in Germany where he lived for 17 years. After being honorably discharged from the US Army, he remained overseas, found a job working in a warehouse and became very diligent in the church. Due to his injuries sustained from the military, he was unable to maintain his job and soon found himself unemployed, divorced and homeless.

It was then Leonardo had to resort to sleeping in his car until he found a means of getting back on his feet. Throughout all his hardships; in 2005, in a small one bedroom apartment in Miesenbach, Germany, he found the inspiration to write Zeufforia. 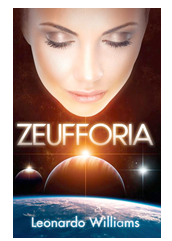