Oakdale, CA -- (SBWIRE) -- 06/27/2013 -- With the wide range of barbecue sauces available on grocery store shelves one would assume that all’s been conquered where the “little condiment that could” is concerned. However, Gary House, host of the widely viewed show “Cooking Everything Outdoors” says otherwise. “I really amp up the flavor with the use of ingredients that are ‘souped up’ so to speak. When you combine flavors it’s one thing but, when you’re careful to combine components that are more intense on their own, it’s a whole other kind of experience.” said the popular show host.

Because House is a fan of seeing his onions in his sauce, he prefers that the they be cut into a small dice before sauteing. Though if a silky smooth sauce is desired he advises a very small mince and an extra long sauté over medium low heat in a bit of olive oil. No matter the dice, he then adds the garlic and sautés both until tender. To that he adds brown sugar, the California Sun-Dried Tomato Ketchup, and the Koko Brown Ale and simmers all together for several minutes. In time he adds the remaining ingredients and continues to simmer them for thirty minutes on low heat. This tact causes the sauce to thicken and can be served when the consistency is at preference. 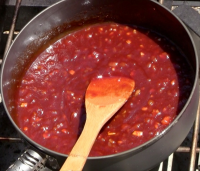