Taking its name from Exploding Sky, the studio founded in the early 90s by twin Brother Artists Matt and the late Mark Enger on New York's lower east side.

The Enger brothers began Making silk screen paintings and street wear that reflected their knowledge and passion for American and Native American history and traditions, Pop Art, the 1960s, Motorcycles and their love of the chaos and Freedom that has always been New York.

Their street wear was quickly adopted by the local musicians, including The Boredoms, Metallica, Lubricated Goat and others. This new-found popularity gave rise to Matt and Mark collaborating through silk-screening with many artists and designers (including Kiki Smith, Donald Baechelor,Catherine Melandrino, Robert Rauchenberg,Spooky and others.)

“The beauty of our country is that artists are free to express themselves in any way they feel the need to. I want to flood the streets of this city with my art, clothing and firearms!” Matt Enger explains.***

Exploding Sky is running at the Christopher Henry Gallery from now until August 19th.

About the Enger Brothers
The Enger Brothers have spent the past two decade’s re?ecting upon the social, political and artistic landscapes of American history through a unique outlaw, anarchist, freedom loving lens.

They quickly established themselves downtown as artists, making unique paintings and silkscreen prints. Matt continue’s to work in painted media and creates collections from his own unique experiences.

Matt’s fully functioning firearms are completely legal to sell to anyone over 18 years of age in the city of
New York. 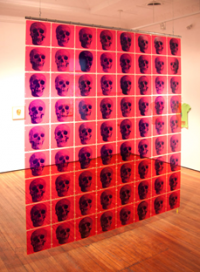