While in Brazil, Dr. Gandhi also enjoyed separate visits with Salvador Municipal Secretary of Education, Juan Carlos Bacelar and the leadership of Institute of Democracy and Sustainability and Fundacao Tide Setubal to discuss the current situation in Brazil and begin a dialogue on how Mahatma Gandhi’s philosophies of nonviolence and education can be implemented in the ongoing development work there. Dr. Gandhi gave a 20 minute interview with the Redo Record de Televisiao News Network and held several press conferences.

Dr. Gandhi gave the keynote speech at Salvador, Bahia Brazil’s Education Annual Conference, “Education in the First Place Forum” held at the Teatro Castro Alves, a Brazilian Theater, the largest and most important artistic center not only in Brazil but in all of Latin America. He also addressed the residents of Sao Miguel Pualista during the visit to Sao Pualo. Joao Signorelli, a Brazilian actor who for the last nine years has played Mahatmas Gandhi.

Dr. Gandhi commented on his trip, “My visit to Brazil this past week has shown me the extraordinary pace of change in that country and its enduring commitment to education and child embetterment.”

“My time in Brazil was very well spent, and I especially was endeared to the support and continued goodworks of the many caring individuals who collectively are leading Brazil to its status as a leader in South America, and the world, in areas of education, child welfare and financial and environmental sustainability,” Dr. Gandhi added.

Dr. Gandhi is one of the world’s foremost spokespersons and teachers on his grandfather’s philosophy of nonviolence and how, optimally utilized, it impacts on developing countries.

Arun Gandhi, the fifth grandson of Indian leader Mohandas K. Gandhi, is an advocate for nonviolence and has been a Washington Post columnist, has worked for 30 years as a journalist for The Times of India, and is the author of several books, including "A Patch of White" (1949) and Legacy of Love (2002). In 2011 Dr. Gandhi provided the keynote address to a gathering of 30,000 attendees at Dali Lama’s birthday event in Washington DC.

Dr. Gandhi said, “A lot of people were involved in my visit Brazil. I am very grateful to IDS, Verbo Communications, the Minister of Education and Culture, Emilia Queiroga Barros of Education in the First Place Forum and Lynnea Bylund’s Catalyst House agency, all who made it possible for me to be here. I am also grateful to The Sons of Gandhi, and to everyone else who made my stay here a very worthy experience.

The Brazil tour included Arun Gandhi’s first visit to Salvador, Bahia and Sao Paulo, and he said this is the beginning of an ongoing dialogue with the country’s political and NGO leadership about Gandhi’s philosophy of nonviolence and solutions for economic development and empowerment.

For more information about Arun Gandhi, his work, and the mission of the Gandhi Worldwide Education Institute, visit www.gandhiforchildren.org and www.catalysthouse.net 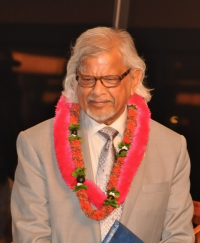