San Juan, Puerto Rico -- (SBWIRE) -- 12/20/2011 -- For most people, every day is filled with an endless array of work, mundane routines and habitual errands. From laundry and cooking to homework and soccer practice, sometimes life calls for a mental escape filled with adventure and the unknown.

A good book has the ability to transport someone from the hustle and bustle of their day into an unfamiliar fun-filled land where anything is possible.

Hailed as a modern-day “Wizard of Oz,” the newly released novelette “The World Within” by M.C. Olmo is a fantastical journey of a brother and sister who get more than they bargained for when an ordinary day trip to a family farm turns into a race against time. Set in the backside of El Yunque rainforest in Naguabo, Puerto Rico, the adventure begins when the pair embark on an action-packed adventure into the forest and Rick, the eleven-year-old brother, gets captured by a strange creature. Juniper, his 14-year-old sister, sets out to find her brother, but ends up meeting a host of magical creatures along the way who do not all have her best interest in mind. Throughout the fantasy, Juniper discovers something very special, all the while trying to find her brother before it is too late.

“The World Within” is the first part in a beautiful series of literature perfect for both adults and children. The author’s detailed descriptions of the characters and surroundings in the book provide readers with an array of stunning imagery that helps bring the story to life.

Drawing from her own childhood experiences at her family’s farm in Naguabo, Olmo said she always felt a sense of respect for the small rainforest located in the farm where she would explore and daydream. “The World Within” includes elements of that sacred rainforest and gives readers the opportunity to join Olmo as she re-imagines the world within.

The youth book has already gained rave reviews from readers for its heartfelt characters and thought-provoking storyline.

“Ms. Olmo’s debut novel is a breath of fresh air in which, through beautifully written descriptions, you can feel the love for her home country and the importance of friends and family,” said Vivi B., a reader. “I felt like I was in a modern ‘Wizard of Oz.’ If you want to be transported to a magical world, this is the book for you. I can’t hardly wait for the next chapter in what promises to be a wonderful series.”

“The World Within” is currently available for digital download from iTunes and Amazon, as well as in paperback from Amazon. To join in the journey, visit http://www.amazon.com/dp/B0062FO0FI

About M.C. Olmo
Marielba Cancel Olmo was born in San Juan, Puerto Rico and grew up in the town of Río Piedras. She has taught English, Science and Spanish, and has worked as writer and translator. She lived in England for three years while pursuing a PhD in English Literature, where she received an ORS (Overseas Research Student Award), and then moved to Barcelona for a year. She returned to Puerto Rico in 1999, where she currently resides. She has written many poems and short stories for several publications. “The World Within” (2011) is her first novel. 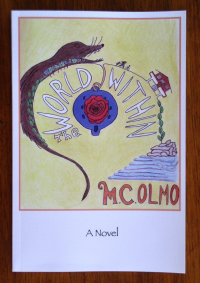