Jeff Spenard, President and Owner of the VoiceAmerica Talk Radio Network, said "I am excited to work with Marsh Engle, who I have known for ten years now, to create and establish one of the first leading live women's platforms to bring together some of the most extraordinary women around the world. By working together with these women, VoiceAmerica and Marsh Engle Media plan to create a community of leading voices."

VoiceAmerica is also launching the channel on its free mobile application. All live and on-demand radio content can be heard via VoiceAmerica's state of the art application and can be downloaded for Apple, Android, Kindle and Blackberry devices.

Sandra L. Rogers, Network Director for the VoiceAmerica Talk Radio Network, said "This is the right platform for women worldwide to share their truths and passion and become a recognized leader in their field by hosting their own show on the VoiceAmerica Women Channel."

Launched by VoiceAmerica, in Partnership with Marsh Engle Media, the channel will feature best-selling authors, CEOs, entrepreneurs, speakers, educators and other leaders in their respective fields as hosts and guests. Programs will air live from 6 AM to 6 PM Pacific Time and will be rebroadcast twelve hours later for convenient listening throughout the world.

Marsh Engle stated, ""With the premiere of VoiceAmerica Women, women now have access to a broadcast platform created with one dynamic aim in mind: to support the rapid increase with the positive impact of women leaders and amplify the results of their projects, initiatives and career endeavors."

About Marsh Engle
Marsh Engle is dedicated exclusively to scaling up business enterprises and the success of women leaders positioned to benefit millions. The groundbreaking programs and events led by Marsh Engle have been instrumental in inspiring the success leadership of over 25,000 life coaches, authors, small business leaders, entrepreneurs and career professionals. Acknowledged as a distinctive authority in the field of consumer communication, her clients have included Paramount Pictures, Viacom, Children's Television Workshop, Australian Broadcasting and more. Her productions have been seen by hundreds of thousands across the United States including those at THE WHITE HOUSE.

About VoiceAmerica Talk Radio Network
The VoiceAmericaTM Network offers the latest conversations in a talk radio format, providing education, interaction, and advice on key issues live, on demand, as well as syndicated content. If interested in hosting a talk radio show on VoiceAmerica Network, contact Jeff Spenard, President of Internet Radio at 480-294-6417 or at jeff.spenard@voiceamerica.com 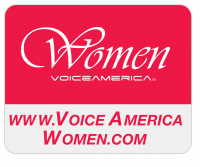