The final peer reviewed NIH reports confirm evidence of an association between cell phone radiation and both heart and brain cancers in large-scale animal study.

Teton Village, WY -- (SBWIRE) -- 11/01/2018 -- U.S. National Institutes of Health National Toxicology Program (NTP) concludes that there is "clear evidence" that male rats developed cancerous heart tumors from exposure to cell phone radio frequency radiation according to final reports released today. In addition, they conclude the increased tumors in the brain and adrenal gland of exposed male rats were "some evidence" of cancer from the cell phone radiation exposure. According to NIH, the final reports on rats and mice represent "the consensus of NTP" and a panel of external scientific experts who reviewed the study data in March and voted to strengthen the conclusion that cell phone radiation caused health effects. Scientists are now calling for federal action - a quantitative risk assessment and protective policies to reduce wireless exposure.

John Bucher, PhD, NTP senior scientist, stated in the NIH press release, "We believe that the link between radio frequency radiation and tumors in male rats is real, and the external experts agreed."

"This animal evidence, together with the extensive human evidence, coupled with the rising incidence of brain cancers in young people in the U.S., conclusively confirms that radio frequency radiation is a Category 1 human carcinogen," explains Anthony Miller MD, University of Toronto Dalla Lana School of Public Health Professor Emeritus, author of 600 scientific publications medical advisor to Environmental Health Trust (EHT), who has served as an advisor to the World Health Organization and co-authored a review paper of the scientific evidence in the journal Environmental Research presenting these conclusions.

EHT has launched a public awareness campaign to raise awareness about how to reduce exposure to cell phone and wireless radiation. The campaign includes printable posters, postcards and shareable videos.

"More than a decade since it was first proposed, and after unprecedented reviews, the NTP has finally released a report confirming what hundreds of other studies have shown—namely that cell phone radiation levels we all encounter every day significantly increase malignant rare tumors of the brain and nerves as well as cause damage to the heart and DNA. Were this any other modern agent, the appropriate regulatory agencies would be taking immediate action to reduce exposures. It is unconscionable that we continue to give millions (of children) the capacity to keep these cancer-increasing devices on their bodies all day or night. People have a right to know that phones are two-way, microwave-radiating radios that should be used with caution. United States owes its citizens better," stated Devra Davis, PhD, MPH, Visiting Professor of Medicine at Hebrew University and President of Environmental Health Trust. "We would not give children cigarettes and alcohol. Why are we giving them devices that increase their risk of cancer years later?"

"Cell phones expose us to levels 2 to 10 times higher than FCC according to cell phone radiation tests conducted by the French National Frequencies Agency on hundreds of cell phones. This is because cell phones are not tested in the way they are used—touching the body. When phones are radiation tested at body contact, they exceed limits," stated Davis, referring to the Phonegate Scandal that resulted in phones being removed from the market in Europe.

"An important lesson that should be learned from this is we can no longer assume any current or future wireless technology is safe," Ronald Melnick, PhD, who led the design of the NTP study in his 28-year career as a scientist at the National Toxicology Program and is currently senior advisor to Environmental Health Trust (EHT), stated, "The NTP studies in experimental animals were designed to test the long held assumption that radio frequency radiation at seemingly 'low' non-thermal exposure intensities could not cause harmful health effects. It failed the test. Cell phone radiation clearly caused cancer in these animals."

"What should happen now is the FDA should be immediately working on developing a quantitative risk assessment from this data and in the meantime the FDA, FCC and other agencies should promote cautionary measures for the population—especially for children," said Melnick who recently published an article in the journal Environmental Research debunking widely circulated criticisms of the NTP study.

"Based on these and other peer-reviewed findings, if radiofrequency radiation were a drug, it would have been pulled off the market. Peer-reviewed studies have found effects on brain development, memory, sleep and fertility and other biologically important endpoints from oxidative stress to headaches to hearing and vision problems, especially in children," Davis added."Over 236 scientists from 41 nations who have published peer-reviewed research on this issue are appealing to the United Nations for stronger regulations to reduce public exposure."

"Considering the widespread exposure among our children and the proliferation of cell towers to prepare for 5G, these findings should not be minimized. Effects were found at non-thermal levels, which means that FCC limits are not protective. Until research tells us otherwise, we can no longer assume wireless devices are safe," said Theodora Scarato, Executive Director of EHT. "The rollout of 5G small cells must be halted. Schools need to install wired Internet networks and use cords to connect devices. Landlines should be maintained throughout communities. Practical solutions exist such as ethernet and fiber optic networks. Let's use them.

"It is time for the National Cancer Institute, the Food and Drug Administration and the Centers for Disease Control to update their websites with concise recommendations that the public should reduce exposure. Public Health Departments need to launch ongoing public awareness campaigns to educate the public about how to reduce emissions and exposures. Everyone needs to understand just how easy it is to use safe wired technologies, especially at home. Employers need to prioritize this issue and make changes in the workplace to limit and minimize emissions and exposures in the workplace. So far, they have been given no choice. We have a responsibility to living and future generations to take action on this issue now."

In light of the NTP study EHT recommends:

The FDA prioritize and perform a quantitative risk assessment to determine the levels of risk to humans.

The private sector launch a research and development program that will ensure consumers have safe technology choices available in the marketplace—meaning devices that have wired connection capability with the ability to quick-disconnect all wireless/bluetooth functions.

The EPA along with relevant health agencies launch a full systematic and independent review of all scientific evidence.

The CDC, NCI and FDA issue clear comprehensive public health recommendations to the public about how to reduce personal firsthand and secondhand exposures to radiation emitted by cell phones, tablets and all wireless devices, accessories and appliances via well-funded ongoing public awareness campaigns.

Policy that will eliminate and reduce exposure from cell towers, indoor and outdoor base stations and Wi-Fi in neighborhoods, community centers, healthcare facilities, places of worship and schools.

Informational labeling on all cell phones and wireless devices that are capable of emitting radio frequency radiation.

An immediate full halt to 5G and small cell deployment.

In 1999, the FDA nominated cell phone radiation to the NTP for large-scale animal studies, stating, "the existing exposure guidelines are based on protection from acute injury from thermal effects of RFR exposure, and may not be protective against any non-thermal effects of chronic exposures."

The final reports concurred with the March peer review panel that the malignant schwannoma tumors found in the heart of male rats be scientifically categorized as "clear evidence of carcinogenicity" and that the malignant gliomas found in the brain of male rats be categorized as "some evidence of carcinogenicity." In addition, the increased tumors of the adrenal medulla in male rats exposed to the GSM type of cell phone radiation were categorized as "some evidence of carcinogenicity," adding a new type of tumor thought to be caused by the exposure. Thus, NIH accepted all of the expert peer reviewer recommendations to strengthen the conclusions regarding several effects from the exposure. The report also documents statistically significant increases in an unusual pattern of cardiomyopathy, or damage to heart tissue, in exposed male and female rats.

In addition to the heart and brain cancers, statistically significant increased numbers of tumors were found in other organs at one or more of the exposure levels studied, including the prostate gland, pituitary gland, adrenal gland, liver and pancreas.

Used a corded phone whenever possible to minimize cell phone use.

Keep the cell phone away from your head and body.

When talking on the cell phone, use speakerphone or wired airtube headset to reduce exposure to your brain.

Avoid carrying your phone against the body like in a pocket, sock, bra or spandex pants.

Laptops and tablets should always be placed on a table, not on your lap.

Be aware of how close children are to you when you are using a cell phone or wireless device and minimize their exposure. For example do not rest a cell phone on your baby or hold a transmitting device near their bodies.

Choose wired Internet (ethernet cable modems) at home/office instead of wireless systems. Use ethernet wired (not wireless) computers to do as much of your internet connection and social media and streaming videos.

Avoid sleeping next to your cell phone or wireless device. Cell phones should be powered off at night. If you use your cell phone as an alarm clock, turn the phone to airplane mode.

Do not charge cell phones or electronics near your bed at night.

Turn your phone off or on airplane mode with Wi-Fi/Bluetooth OFF more. Even in standby mode, your phone emits RF energy because it is constantly searching for service or new messages. If you do not need your cell phone, simply turn it off. This also applies to all other wireless devices whereby the Wi-Fi antennas can be powered off. Wifi laptops tablets and other devices such as gaming devices are always transmitting even if you are not using them so remember to power them off.

About Environmental Health Trust
EHT is a virtual scientific thinktank conducting cutting-edge research on environmental health risks with some of the world's top researchers, and developing pilot public educational programs in Jackson, Wyoming. EHT educates individuals, health professionals and communities about policy changes needed to reduce those risks. Currently, EHT is addressing health effects of emissions caused by use of cell phones and other wireless devices and networks and recommends reducing exposure to reduce risk. The Environmental Health Trust maintains a regularly updated database of worldwide precautionary policies on cell phone radiation as more than a dozen countries officially recommend reducing wireless exposure to children and have policies in place to reduce public exposure. 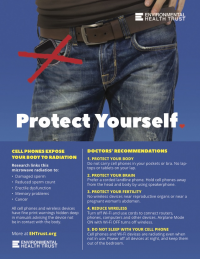