I Wish He Was Dead: Lies, Abuse & a Tarnished Family Fuse in Chilling Memoir. Just How Broken Is the U.S. Justice System?

Candidly written by Jan Jencomb, ‘I Wish He Was Dead’ exposes just how much damage a lying and devious woman can do to her ex-husband, children and wider family. While it’s a shocking and true story of one family’s plight, the book also calls into question the wider U.S. justice system and its agenda to hide the truth.

Raleigh, NC -- (SBWIRE) -- 01/17/2014 -- Like twenty one million other mothers in the United States, Jan Jencomb knew that helping her Son Griegory through his divorce from wife Lyndalu wouldn’t be easy. However, she didn’t expect Lyndalu to systematically destroy her life, Griegory’s and also that of their daughter, Emma Kay.

Through a cataclysmic cocktail of Lyndalu’s own deception, lies and a justice system that frankly supported her behavior, the entire family entered a spiral of unstoppable abuse and broken happiness. Everything is exposed in “I Wish He Was Dead,”: Based on a True Story of Abuse, Greed, Hate, Distortion, Falsehoods, Fraud, Love of Money, and Divorce’ – an account of this turmoil that is frank, raw and painfully honest.

Since Emma Kay was born eleven years ago, I have kept pictorial records (both still and video) of her life, growth, and activities. We soon began to lose faith in our judicial system, especially as it relates to the male spouse in divorce proceedings. The Internet had a site for a local attorney which gave instructions on getting the male spouse out of the house-corner him so he will be forced to touch the female spouse to get past her. She played her cards to the limit after that, signing papers for a restraining order.

The separation agreement was already written, but the dates in the agreement were all wrong. My son was set up and trapped. He lost his home businesses and didn't see his daughter for five weeks. The hatred, anger, and emotional abuse she continued to show exceeded any behavior I had ever witnessed. Her emotional abuse to her daughter, and to me, was inconceivable, incomprehensible, and inexcusable. I started keeping written documentation more than six months prior to her actual drama. I started my documentation as a therapeutic value for me. It was much later that I decided to document everything I could in a book. I hope it will be of some help to other unsuspecting husbands.

Jencomb has two bold goals for her book.

“The first thing I want to do is highlight just how much damage one woman can do to a family. Almost a decade after the initial problems Lyndalu still makes it abundantly clear that her goal is to make the rest of Griegory’s life as miserable as possible. Of course, she is destroying the life of her children and us wider relatives in the process,” says Jencomb, who had the book featured at the 2013 New York State Reading Association Book Exhibit in Albany, New York.

Continuing, “The second thing I want to do is expose the fatal holes in our justice system. Attorneys and judges refused to listen to my son’s side of the story and this is a democratic travesty. It begs the question – do we even have a justice system at all?”

The book has received rave reviews. For example, reader Roxanne comments, “I recommend this book to anyone who has been victimized by someone who has wormed their way into a family and ultimately almost succeeded in completely destroying everyone involved. It's not a "rant and rail" book as much as it is a story of how the author's family (especially the author and her husband, their granddaughter, and their son) have been jerked around emotionally and mentally by one of the most narcissistic people I've ever had the displeasure of knowing.”

‘I Wish He Was Dead: Based on a True Story of Abuse, Greed, Hate, Distortion, Falsehoods, Fraud, Love of Money, and Divorce’ is available now: http://amzn.to/1k0vx1g. It can also be purchased from Barnes & Noble and most local book stores.

To offer updates on the continually-evolving situation, the author has condensed her book into a short story titled ‘Two Wives’. This story is attached for your perusal.

About Jan Jencomb
Jan Jencomb is a native North Carolinian, born and reared in Pender County (Burgaw), NC. She earned her BS in business and English at ECU and her MEd at NCSU. Jan lives in Raleigh, NC, with her husband. They have two children, two beautiful granddaughters, and two handsome great-grandsons. This book is published under the pen name, Jan Jencomb, aka Faye L. Gardner. 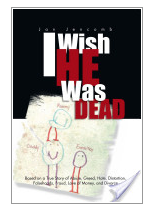